A contribution by the IBON Foundation

The IBON Foundation is a research, education and information NGO based in Quezon City, Philippines. Since 1978, we have worked with social movements and grassroots organizations to bring about inclusive socioeconomic transformation. Our international department was spun-off into the stand-alone IBON International in 2007. 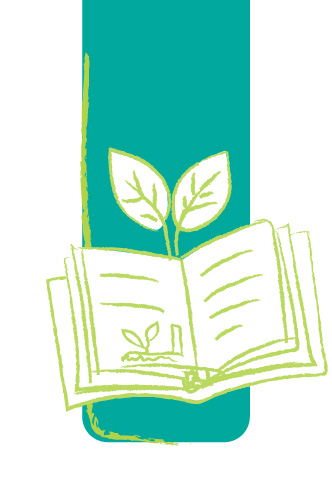 There can be no sustainable consumption if people and planet are not placed at the centre of economic models. We promote ‘People Economics’ where the natural resources, labor, and production of the economy is most of all geared to improving the lives and welfare of the majority rather than merely enriching a few.

An economy built on solidarity and cooperation – instead of compulsion and exploitation – is the only way to have sustainable patterns of production and consumption. This includes upholding the right to self-determination and protecting traditional ways of life. 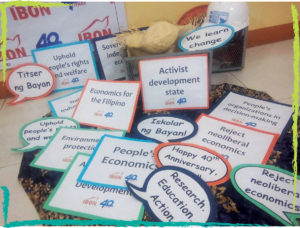 Calls to action for a Peoples’ Economy at an IBON Foundation event. Credit: Kenneth Cadiang/ ALCADEV

Transforming the economy requires us to work at the policy level. The economy is the result of conscious policy choices and it is so important to ensure that these are choices for the better interest of the many instead of just the profits of a few.

We study current policies and propose alternatives. But this is not enough – we also have to work with producers and consumers, workers and farmers, informals and small entrepreneurs, women and youth, and allies in government. The equitable and sustainable systems that we want must be shaped by all those who have a stake in a better future.

IBON Foundation has been taking up environmental issues since the mid-1980s. Since the early 2000s, we have worked more deeply on issues of sustainable consumption and production rooted in the knowledge that Filipinos are not consuming enough – far too many still merely live on the margins of subsistence. Our recently updated ‘State of the Philippine Environment’ report that explains the structural roots of environmental problems and the basis for optimism has been a long-standing reference for advocates.

We identified two important pre-conditions for sustainable consumption and production.

First, the production of goods and services must not just be environmentally-friendly but also equitable. Income has to be distributed fairly and justly. This enables people to make their preferences felt in markets and, by reducing their desperation, gives them more freedom to assert control over their lives at the local and national levels.

Second, communities need to be organized to have the strength to challenge the inequitable structures of economic and political power that do such harm to the planet and people’s lives.

Communities working together provide the greatest chance that they will be able to determine their own futures.

Our societies must become more democratic. Our support for schools organized by indigenous people themselves in remote communities of Mindanao island, in the southern Philippines, illustrates our work to build sustainable production systems and collective consumer agency.

Millions of Filipinos are deprived of  even basic education because they cannot afford schooling, it is of poor quality, or there is outright none available. The Lumad (“born of the Earth”) people comprise 18 indigenous groups that have historically been marginalised and denied education. State-sanctioned mining and logging companies have exploited this to encroach into their ancestral lands.

To defend themselves, the Lumad communities set up their own schools with the help of religious and civil society organisations and other education advocates. We support these initiatives of the Lumad. The schools go far beyond merely educating youth to overcome individual poverty –they are oriented towards the communities determining their own future through collective action and in ways aligned with their traditional values.

IBON Foundation recognises education as a critical enabler of the sustainability transition if it is value‑led and supports the aspirations of the people.

Youth are taught traditional and modern agricultural skills to support food production, along with literacy, mathematics, and critical thinking about society. There is an emphasis on learning that values natural resources, that honours the labour of people, and upholds the ideals of sovereignty and liberation.

We brought together educators, researchers and artists to work with teachers and students at schools such as the Alternative Learning Center for Agricultural and Livelihood Development. The educated and empowered Lumad youth showcase the power of education to support the transition to sustainable consumption by fulfilling the preconditions of equitable production and democracy. We documented and were inspired by the transformative learning taking place, often under very difficult conditions of militarization and displacement.

Outside our work with Lumad schools, IBON Foundation has organised 16 national teachers’ conferences and about 230 international conferences and activities in 40 countries. Our IBON Partnership in Education and Development works with more than 300 schools to help create future generations of sustainable and empowered producers and consumers.

Commonalities and particularities of the sustainability struggle

We drafted the song ‘Together’ through an immersive process with some of Brazil’s landless people. It speaks to the commonalities and particularities of the struggle for land and food for all in the Philippines, Brazil and many other countries. The more people that call for better lives for all, the more effectively is change forged – from minute shifts to significant waves upon waves.

In the eyes of a child

Once again we were shown

How the world is abundant with gifts

But as many stories go

There is a problem about

[How a powerful few want more than

We have our common worries

That make our hearts bleed more

than we can bear alone

But since that  light shone

Bound our hearts and our dreams

How can we not achieve what we

And then again in the eyes of a child

Once again we were shown

How the world is abundant with gifts

And as many stories go

[When the people of the world

Should a spark disappear

Or the light put out

and do not forget